Pagliacci – opera as meditation on life and art

The Austin Lyric Opera‘s production of Pagliacci was a beautiful and heartbreaking performance and reminds me once again how lucky Austin is to be a small city with big-city artistic drive. I am an opera neophyte and freely admit it, so if someone has a more informed criticism of the performances I am sure they will be more useful than mine, but you know what — I still think the singers were extraordinary. Danielle Pastin was fantastic as Nedda and Carl Tanner as Canio was amazing as well. Check out Carl Tanner’s blog — just a good ol’ boy who liked to sing in the shower and became a world-acclaimed tenor. 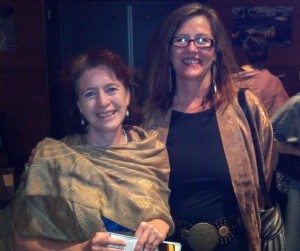 And oh, the set! I think the audience gasped when the curtain rose. And ALO must have an arrangement with the Austin children’s choir. The last opera I went to see was La Boheme and they had many kids from the choir as extras as well. Way to get kids involved in classical music!

The Long Center is perfect too — my friend and I took in the Austin skyline from the Long Center along with the other show-goers and the view is gorgeous.

I sort of knew the story of Pagliacci before I saw the opera, but was not prepared for the nuances. The opera is a commentary on art and commedia dell’arte. We laugh at the infidelity portrayed in the stories of Columbine and Harlequin. Oh those silly clowns! But the infidelity is real in the framing story, and the heartbreak and betrayal is real too. And since this is opera, this doesn’t end well.

Opera is so stylized, it’s hard to create an intimate connection between characters and story and audience — the gestures are large, the singing is big, and stories are oversized. But Pagliacci achieves nuance. In the scene in which the actors are acting in the comedy, the real infidelity looms over them, and Canio breaks out his role as clown and addresses his unfaithful wife directly. The audience on the stage reacts with confusion; the audience in the theater gets to react too, and see all the pain and unhappiness and resulting bloodshed.

I wonder if this is the first (possibly only) time that opera was used as a way to comment on theater itself. After all, what is commmedia del arte but opera writ small, so small that it fits in a single wagon for a one night show? And what does it say about us that we are willing to laugh about heartbreak in one venue but not in another?

This site uses Akismet to reduce spam. Learn how your comment data is processed.

The Sisters Mederos and a theory of magic

Update11/21/20: In my semi-regular series of posts for NaNo, I’m reboosting my post on magic. Usual disclosure: This is my theory of magic in fantasy. There are other points of view. I personally do not Read more…

Harlan Ellison, Hannah Gadsby, and the Art of Transgression

On same day that I heard about the death of Harlan Ellison, I watched Hannah Gadsby’s Netflix special, “Nanette.” The juxtaposition did not go unnoticed, by me anyway. One artist shocked the world with their Read more…